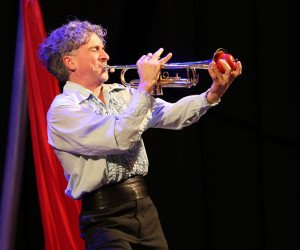 Together with Maila Sparapani he founded the Contemporary Circus Company “Nando e Maila”. His artistic experience began with the study of guitar and violin. From 1990 to 1995 he attended DAMS in Bologna and in 2001 he graduated from the “Nouveau Cirque” course of the School of Theatre of Bologna Alessandra Galante Garrone.

He is one of the founders of the “Laboratory of Music & Image” with which, in addition to various festivals and tours in Italy and abroad, he created “A propos de …” CD Erosha 1992 and “Giro di basso / Colpi dry” CD Erosha 1996.

In 1991 he studied the trumpet with Paolo Fresu and gave life together with other musicians to the band project “Banda Roncati”, which he recorded for “Trasmigrazioni” CD Il Manifesto in 1996. In 1992 he collaborated with Fred Frith on the realization and recording of the opera “Pacifica”, CD Tzadik, New York 1998.

He played with Jon Rose creating “Rosemberg revised timetable” CD Erosha 1994 and with Butch Morris for the “Conduction # 31” at the Podewil in Berlin.

In the same year he was one of the founders of the “Ivan Illich” Popular Music School in which he dedicated himself to teaching the violin and researching innovative music education. From ’97 to ’99 he was among the founders of the group of Popular Poetic Theatre “Zero Teatro” in Bologna, with which following a four-month trip to Africa, he developed research on the origin and value of rituals, experimenting with a style of theatre close to people and connected to everyday life.

Since 2000 he has deepened his artistic training with professionals from different artistic backgrounds, such as Eric de Bont and Luca Domenicali for research on musical comedy, Philippe Radice, Jean Mening and Rita Pelusio to deepen the research on the clown and the neutral mask, whilst for comic writing and for the Commedia dell’Arte, he makes use of the precious artistic collaboration of Carlo Boso and Marta Dalla Via (Premio Scenario 2013).

In 2001 he graduated from the “Nouveau Cirque” course of the “Alessandra Galante Garrone” School of Theater in Bologna and collaborated with the “Cirque Baroque”, Valeria Campo, Giorgio Rossi, Carlo Cialdo Capelli. He participated in the International Contemporary Circus Festival of Brescia and in the Venice Biennale as an actor in the show “Ombra di luna” directed by Marcello Chiarenza. He collaborated with the Compagnia Ravenna Teatro Vivo for the comedy of art shows “Comedy in Comedy” in 2002 and “Comedians and Heads of Comedy” in 2004, both directed by Carlo Boso.

In 2003 he developed, with Maila Sparapani, the contemporary circus show “Vanjuska Moj” (later reworked and taking the current name of “Kalinka”) directed by Luca Domenicali, with whom he participated in the most important circus-theatre and urban theatre festivals in Italy.

From 2005 to 2006, in collaboration with the School of Theatre of Bologna Alessandra Galante Garrone, he worked on the “Cirque Cabaret” project at the San Leonardo theatre, a group of artists who worked together daily, to create an experimental show that changes every time and where prose theatre, circus and live music try to merge and interact with each other. The show is not only frontal for the actors propose situations in the middle, to the side and behind the audience, in order to create a feeling of wrapping and continuous surprise, trying to make the most of all the places in the theatre. The project lasted two years with monthly work presentations at the San Leonardo theatre in Bologna.

From 2004 to 2007 he took part, taking care of the technical-musical aspect, in the project of the “Merry Widows”, a female band that combines spectacle with live music.

From 2007 to 2010, he engaged in three years of creation for “Sconcerto d’amore”, a process constantly followed by the artists and directors Marta Dalla Via, Carlo Boso and Luca Domenicali.

In 2010 he made his debut together with Maila Sparapani, with the show ” Sconcerto d’amore”.

In 2011, he founded the Ludic Circus School “ARTinCIRCO” in Ozzano dell’Emilia (BO), trying to combine experience, the poetry of the Company and the new pedagogy of the ludic circus.

In 2012 he worked on the international adaptation of the show “Sconcerto d’amore”, with Adrian Schvarzstein, deepening the various aspects of universal language.

Since 2016 he has been in charge of the Artistic and Logistic Direction of the Contemporary Circus Festival “Dulcamara Circus” in Ozzano dell’Emilia.

In May 2018, he made his debut to the Artistic Direction of the Contemporary Circus Festival “ARTinCIRCO Festival” in Ozzano dell’Emilia.

In June 2019 he made is debut with the show “Tunes for tubes” and won the “Award for the continuity and growth of the artistic path of the Company” at the Mirabilia Festival (Fossano – CN).

Currently the Company represents the shows “Kalinka”, “Sconcerto d’amore”, “Cabaret Circense” and “Tunes for tubes”, which since 2004 have made over 1500 performances in Italy and abroad, both in theatrical settings, and in the context of national and international festivals.