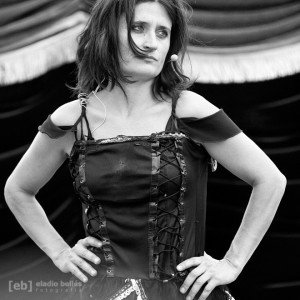 Together with Ferdinando D’Andria she founded the Contemporary Circus Company “Nando e Maila”. She graduated from DAMS in 1997 and graduated from the “Nouveau Cirque” course of the Bologna Theatre School in 2001, specializing in aerial techniques of fabrics and trapeze at the Ecole de Cirque du Verden in Montreal in Canada, at the Ecole de Cirque “Noctambul” near Paris and the Charibari Circus School in Madrid.

From ’88 to ’90 she attended the school of theatre “Petit ecole” conducted by Gianfranco Frelli in Jesi and the contemporary dance schools of Cast V Piano in Ancona and Choreographic centre of Pesaro. Between ’93 and ’95 she participated in the seminar “Work of the actor” at the Institutet for Scenkonst held by Ingemar Lindh in Pontremoli (MS), in the theatre laboratory with prisoners of the S. Anna penitentiary of Modena organised by the directors Giorgio Degasperi and Vito Minoia, at the seminar “Voice, Body and Soul” with the singer / musician Ida Kelarova in Brno (Prague) and joined Germana Giannini’s Teatro della Voce, with which she developed a work on techniques and vocal experimentation.

She founded the “Teatro Zemrude” in Bologna, with which she developed a theatrical research poetic inspired by dance theatre. She created and performed in the shows “Tetracromia”, “The Courtyard”, and “Shadows of clowns”, with which she participated in various Italian and international festivals (“Bologna Sogna”, “Islands that speak” in Palau, “Arena” in Erlangen, ” Schauplatz ”in Erfurt).

From ’97 to ’99 she was one of the founders of the group of Popular Poetic Theatre “Zero Teatro” in Bologna, with which following a four-month trip to Africa, she developed research on the origin and value of rituals, developing a theatre close to people and connected to everyday life.

Since 2000 she has deepened her artistic training with professionals from different artistic backgrounds, such as Eric de Bont and Luca Domenicali for research on musical comedy, Philippe Radice, Jean Mening and Rita Pelusio to deepen research on the clown and the neutral mask, whilst for comic writing and for the Commedia dell’Arte, she makes use of the precious artistic collaboration of Carlo Boso and Marta Dalla Via (Award Scenario 2013).

In 2001 she graduated from the course of “Nouveau Cirque” of the School of Theater of Bologna “Alessandra Galante Garrone” and collaborates with the “Cirque Baroque”, Valeria Campo, Giorgio Rossi, Carlo Cialdo Capelli. She participated in the International Contemporary Circus Festival of Brescia and in the Venice Biennale as an actress in the show “Ombra di luna” directed by Marcello Chiarenza. She collaborated with the Teatro Vivo company of Ravenna for the comedy of art shows “Commedia in Commedia” in 2002 and “Comici e Capocomici” in 2004, both directed by Carlo Boso.

In 2003 she created, with Ferdinando D’Andria, the show of Contemporary Circus “Vanjuska Moj” (now reworked as “Kalinka”) directed by Luca Domenicali, with whom she participated in the most important circus-theatre and urban theatre festivals in Italy.

From 2005 to 2006, in collaboration with the School of Theatre of Bologna Alessandra Galante Garrone, she refined the “Cirque Cabaret” project at the San Leonardo theatre. A group of artists who work together daily, to create an experimental show that changes every time and where the theatre of prose, the circus and live music try to merge and interact with each other. The show is not only frontal but the actors propose situations in the middle, to the side and behind the audience, in order to create a feeling of wrapping and continuous surprise, trying to make the most of all the places in the theater. The project lasts two years with monthly work presentations at the San Leonardo theater in Bologna.

From 2004 to 2007 she participated in the project “Merry Widows”, a female band that combined entertainment with live music. A musical parade-show, played by thirteen artists of various nationalities, who come from different musical, circus and theatrical backgrounds.

From 2007 to 2010, she was engaged in three years of creation for “Sconcerto d’amore”, a process constantly assisted by the artists and directors Marta Dalla Via, Carlo Boso and Luca Domenicali.

In 2010 she made her debut together with Ferdinando D’Andria with the show “Sconcerto d’amore”.

In 2011, she founded the Ludic Circus School “ARTinCIRCO” in Ozzano dell’Emilia (BO), trying to combine experience, the poetics of the Company and the new pedagogy of the Ludic Circus.

In 2012 she worked on the international adaptation of the show “Sconcerto d’amore”, with Adrian Schvarzstein, deepening the various aspects of universal language.

Since 2016 she has been in charge of the Artistic and Logistic Direction of the Contemporary Circus Festival “Dulcamara Circus” in Ozzano dell ‘ Emilia. Currently the Company performs the shows “Kalinka” and “Sconcerto d’amore”, which since 2004 have had over 1000 performances in Italy and abroad with an average of 100 performances per year.

In May 2018, she made his debut to the Artistic Direction of the Contemporary Circus Festival “ARTinCIRCO Festival” in Ozzano dell’Emilia.

In June 2019 she made is debut with the show “Tunes for tubes” and won the “Award for the continuity and growth of the artistic path of the Company” at the Mirabilia Festival (Fossano – CN).

Currently the Company represents the shows “Kalinka”, “Sconcerto d’amore”, “Cabaret Circense” and “Tunes for tubes”, which since 2004 have made over 1000 performances in Italy and abroad, both in theatrical settings, and in the context of national and international festivals.